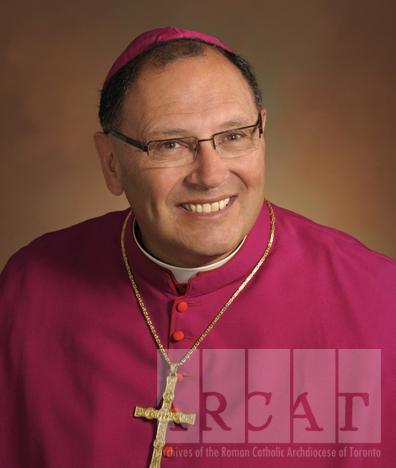 Richard Grecco was born in St. Catharines, Ontario on March 4, 1946. He studied at St. Augustine's Seminary, Toronto, before being ordained priest on September 2, 1973. Father Grecco studied at the Gregorian University in Rome and in 1982 received a Doctorate of Theology from the University of St. Michael's College in Toronto.

After his ordination, Father Grecco served as associate pastor at St. Denis Parish, St. Catharines, before leaving to join the faculty of St. Augustine's Seminary in 1977. Since then, he has been involved in education and has held various teaching positions, including director of religious education for the diocese of St. Catharines. There he coordinated programs and established a diocesan quarterly newspaper, Vineyard.

Father Grecco was an assistant professor of moral theology at St. Joseph's College, University of Alberta, in 1992 and a sessional lecturer in Christian ethics at the University of St. Michael's College, Toronto.

He was serving as pastor of St. Alfred's Church in St. Catharines when, on December 5, 1997, Grecco was appointed titular bishop of Uccla, and Auxiliary Bishop of London.  He was consecrated February 2, 1998.

Bishop Grecco was appointed Auxiliary Bishop of Toronto April on 27, 2002, and was welcomed at a Mass at St. Michael's Cathedral on June 13, 2002. He served on the board of directors of the Catholic Health Association of Ontario and on the education commission for the Ontario Conference of Catholic Bishops. He was also chair of the Canadian Conference of Catholic Bishops' Episcopal Commission for the English Sector on Christian Education, and was an episcopal advisor to the Third Continental Congress on Vocations.

On July 11, 2009, Bishop Grecco was appointed Bishop of Charlottetown, Prince Edward Island. He was installed at St. Dunstan's Basilica in Charlottetown on September 21, 2009.