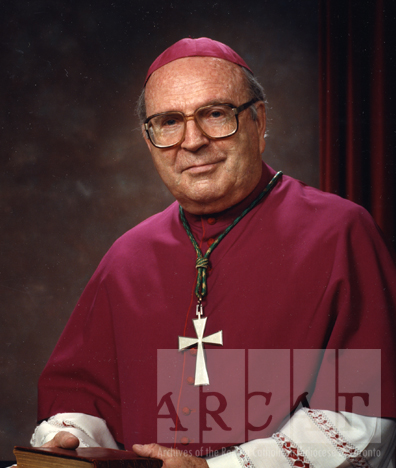 Archives of the Roman Catholic Archdiocese of Toronto, PH 16/01CP
Photograph of Bishop Lacey by Newsome Photography, Toronto
[between 1979 and 1992]

M. Pearse Lacey was born in Toronto on November 26, 1916. He attended St. Helen's Separate School and St. Michael's College before entering St. Augustine's Seminary in 1936. He was ordained on May 23, 1943 in St. Michael's Cathedral by Archbishop James McGuigan.

Over the years, Monsignor Lacey served as Chaplain and Director of the Christian Family Movement, and Vice-Chairman of the Senate of Priests. He was on the Archdiocesan Building Committee (1964), Chairman of the Archdiocesan Liturgical Commission (1965-70), Trustee of the Metropolitan Separate School Board (1965-70) and Vice-President of the National Federation of the Senate of Priests (1975 -76).  Monsignor Lacey was one of the organizers of St. Stephen's Downtown Chapel, which opened in 1977 to serve the business community.

Bishop Lacey was appointed Vicar for the western region of the Archdiocese as well as Vicar for Priests' Personnel. He retired on May 31, 1993. In his later years, Bishop Lacey continued a tradition of service, presiding at sacramental celebrations up until late 2013 when his health would no longer permit such involvement.

Most Reverend Lacey, Bishop Emeritus of Toronto, passed away on April 2, 2014 at the age of 97 and was interred at Mount Hope Cemetery in Toronto.