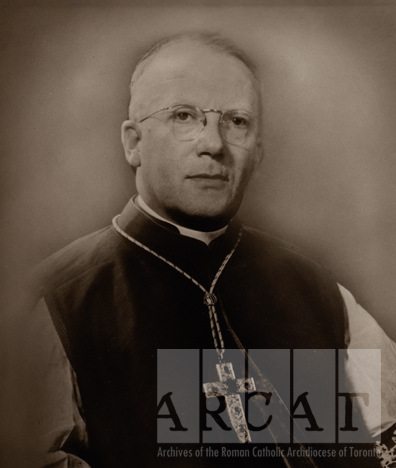 Archives of the Roman Catholic Archdiocese of Toronto, PH 10/06P
Photograph of Bishop Webster by Cyril Cassidy [between 1946 and 1954]

Benjamin Webster was born in Hull, Yorkshire, England on March 7, 1898. He and his parents immigrated to Canada when he was approximately seven years old and settled in St. Catharines. He attended St. Catharines Collegiate Institute before studying at the University of St. Michael's College, Toronto, from 1915 to 1919. Webster entered St. Augustine's Seminary in 1919 and was ordained at St. Michael's Cathedral by Archbishop Neil McNeil on May 26, 1923.

Father Webster was appointed titular Bishop of Paphus and Auxiliary to James Cardinal McGuigan on September 24, 1946. He was consecrated at St. Michael's Cathedral on November 21, 1946 by Cardinal McGuigan assisted by Bishop John Kidd of London and Bishop Joseph Ryan of Hamilton. As well as assisting Cardinal McGuigan with various episcopal duties, Bishop Webster also served as Diocesan Consultor. From 1951 to 1954 he was also pastor of St. Joseph's Parish, Toronto.

On April 21, 1954, Bishop Webster was appointed Bishop of Peterborough, Ontario. He served in that capacity until his retirement on March 12, 1968 at which time he became titular Bishop of Tigamibena and Chaplain of St. Joseph's Hospital, Parry Sound. Bishop Webster died in Parry Sound on January 18, 1981, and was interred in St. Peter's Cemetery, Peterborough.