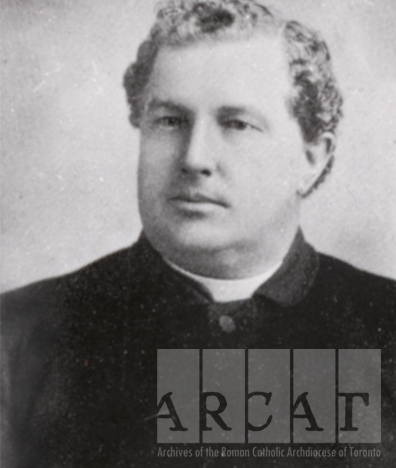 Archives of the Roman Catholic Archdiocese of Toronto, PH 06/01P
Photograph of Archbishop O'Connor by an unknown photographer, 1883

Denis T. O'Connor was born on February 26, 1841 in Pickering, Ontario. He made his classical and philosophical studies at St. Michael's College, Toronto, and entered the Congregation of St. Basil in 1859. He took theology with the Basilians in Toronto and spent his novitiate year in France. On December 8, 1863 he was ordained priest by Bishop Lynch in St. Michael's Cathedral. Father O'Connor, C.S.B., served as a professor at St. Michael's College and Superior of Assumption College, Windsor, until 1890.

On July 18, 1890, Father O'Connor was appointed Bishop of London, Ontario. He was consecrated October 19, 1890 by Archbishop Walsh in St. Peter's Cathedral, London. Bishop O'Connor was the first Basilian priest to reach the episcopacy.

On January 7, 1899, O'Connor was appointed Archbishop of Toronto, becoming the archdiocese's first bishop born in Ontario. Archbishop O'Connor soon became a leading figure in the question of certification for Separate School teachers and he guaranteed an equal education for Catholic children. The archbishop strongly believed in a well-trained clergy and in the Catholic education of the laity. Newly ordained clergy were required to submit to examinations at regular intervals and older clergy attended frequent retreats and seminars. Archbishop O'Connor also implemented a thorough course of religious instruction for all Catholic schools.

Due to ill health, Archbishop O'Connor resigned his See on May 4, 1908. After a long battle with Bright's Disease and diabetes, he died on June 30, 1911 and was buried in the Basilian plot at Mount Hope Cemetery.