The Archdiocese of Toronto is committed to encouraging the development of the specially privileged religious relationship that Christians have with the Jewish people.1 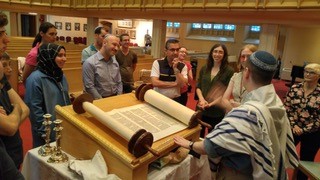 Sessions for the education of Catholics are offered from time-to-time in the Archdiocese of Toronto.

Extensive resources are available for formation in Jewish-Catholic relations.

These range from repositories and collections of documents, statements, articles, themes in current dialogue, educational and liturgical aids, and texts on the history of Jewish-Christian relations to programmes.

Walking God’s Path, a six-part multimedia curriculum, is an introductory resource appropriate for use in parishes and schools:

The Psalms: A Doorway to Jewish-Catholic Dialogue (2020) issued by the Canadian Conference of Catholic Bishops and the Canadian Rabbinic Caucus bilateral dialogue presents teaching and reflections flowing from deep study of a selection of psalms from the perspective of both traditions. This document likewise serves as an invitation for further encounter among the faithful of the Catholic and Jewish communities.

Reading Psalms as the Water Rises and Leaders Guide (2022).

Lived Diversity: Observing Passover and Easter (2022).
Through conversations and storytelling, paired with instruction about each observance, this 13-minute video is a lively presentation of the diverse expressions of our religious traditions. A facilitation guide with questions for discussion and resources for further reading is available.

About the Jews (2022)
This ground-breaking animated short video series was originally created by the American Jewish Committee with the aim of fostering understanding of Judaism in the Arab world. Video titles include: What is Antisemitism? Who are the Jews of America? Is Israel only for Jews? Protocols of the Elders of Zion, Jerusalem, The Holocaust, Jewish-Muslim Relations, and Who are the Jews?

Scriptural Reasoning is a helpful tool for Jewish-Catholic dialogue. It is premised on people of different faiths coming together to read and reflect on their scriptures. Unlike some forms of engagement, it is not about seeking agreement but rather exploring the texts and their possible interpretations across faith boundaries, and learning to ‘disagree better’. The result is often a deeper understanding of others' and one’s own scriptures, as well as the development of strong bonds across faith communities. Scriptural Reasoning is now practised globally, including in places affected by religion-related tensions and conflict.” A vast library of resources is available for Spiritual Reasoning, from ‘Text Packets’ on various topics to guidelines and tips for the facilitation of groups.

Guided visits to synagogues are especially helpful in establishing contact and building bridges for relationship with the Jewish community.2 Festivals, Shabbat Services, “Teaching” Seders, and commemorations of important events in the history and life the Jewish faith community provide not only educational opportunities for Catholics but also foster solidarity for common action and friendship.

Dialogue and common witness with the Jewish community is often done ecumenically.3

“In working out religious relationships with Jews and in their relations with members of other religions, in accordance with appropriate directives, Catholics can find many opportunities for collaboration with members of other Churches and ecclesial Communities. There are many areas where Christians can work together in fostering dialogue and common action with the Jews, as for example in struggling together against anti-Semitism, religious fanaticism and sectarianism. Collaboration with other believers can take place in promoting religious perspectives on issues of justice and peace, support for family life, respect for minority communities, and such cooperation can also address the many new questions of the present age. In these interreligious contacts, Christians can appeal together to their common biblical and theological sources, thereby bringing Christian insights to this broader context, in a way that fosters Christian unity as well”. (Ecumenical Directory §210)

Archdiocesan Statement on Conflict in the Middle East, Local Cases of Hatred and Anti-Semitism
Statement from Cardinal Thomas Collins, Archbishop of Toronto.

International Holocaust Remembrance Day
Annually on 27 January, events are held to mark the annual observance of the end of the tragedy of the Holocaust that occurred during the Second World War.

The video, "Our Liberation", honours the lives of many who survived the Shoah.

International Kristallnacht Commemoration
Annually around 9-10 November, events are held to mark Kristallnacht or "The Night of Broken Glass," which took place in 1938. In one night, Nazi-orchestrated violence killed 92 Jews, arrested more than 25,000 others and destroyed 200 synagogues and thousands of Jewish homes and businesses. Kristallnacht is recognized as the start of the Holocaust. It is remembered as a way that honours the dead and aims to teach younger generations about the injustice that occurred.

Some Institutes of Consecrated Life, Societies of Apostolic Life and Ecclesial Movements with explicit charisms promoting relations with the Jewish community are found in the Archdiocese of Toronto (e.g. The Sisters of Our Lady of Sion and the Focolari).