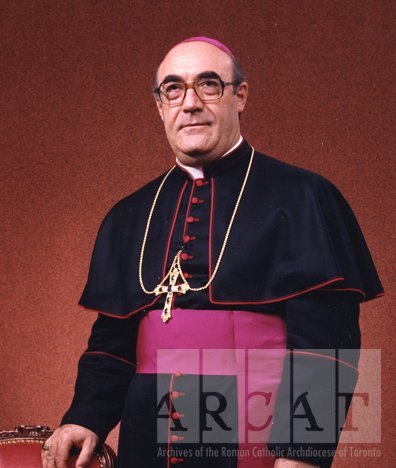 Nicola De Angelis was born on January 23, 1939 in Sabina, Italy. He entered the Sons of the Immaculate Conception religious order in 1959 and completed his philosophical studies in Rome with the Salesian Fathers. In 1967 he immigrated to Canada and entered St. Augustine's Seminary for his theological studies. He was ordained into the Sons of the Immaculate Conception order on December 6, 1970 by Archbishop Philip Pocock in St. Sebastian's Parish, Toronto.

After his ordination Father De Angelis lived in residence at St. Sebastian's Parish before being appointed pastor in 1972. He obtained his Canadian citizenship in 1975. Father De Angelis served two terms as a trustee of the Metropolitan Separate School Board from 1976 to 1980. In October of 1977 he was appointed to the Minister's Advisory Committee by the Honourable Thomas Wells, Ontario Minister of Education. In 1980 Father De Angelis was appointed Vice-Chancellor of Temporal Affairs for the Archdiocese of Toronto. That year he also earned a Doctorate of Ministry from the Toronto School of Theology.

On April 27, 1992 Father De Angelis was elected titular Bishop of Remesiana and Auxiliary to Archbishop Aloysius Ambrozic. He was consecrated in St. Michael's Cathedral on June 24, 1992 by Archbishop Ambrozic, who was assisted by Archbishop Leonard Wall of Winnipeg and Bishop Thomas Fulton of St. Catharines. Upon his consecration Bishop De Angelis became Vicar of the central region of the Archdiocese, which includes Toronto, East York and North York. He was also responsible for the care of the ethnic communities in the Archdiocese formerly under the jurisdiction of Archbishop Ambrozic.