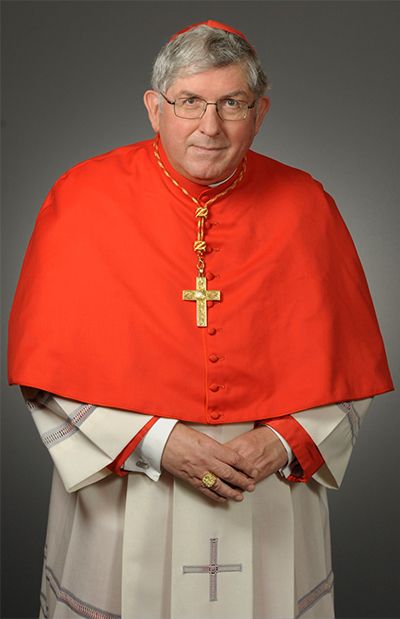 Cardinal Thomas Christopher Collins was born and raised in Guelph, Ontario, where his father was the circulation manager of the Guelph Mercury and his mother was a legal secretary. He is the only son and the youngest of three siblings. His childhood home was situated behind The Church of Our Lady, where he attended and served morning Mass.

Cardinal Collins considered being a teacher or a lawyer but was profoundly inspired by his Grade 11 English teacher, Father Newstead, at Bishop Macdonell Catholic High School, who knowing him, suggested that he should consider the priesthood. In 1969 he obtained a Bachelor of Arts (English) from St. Jerome College in Waterloo. In 1973 he obtained two degrees, a M.A. (English) from the University of Western Ontario and a Bachelor of Theology from St. Peter's Seminary in London, Ontario. That same year he was ordained to the priesthood on May 5, 1973 in the Cathedral of Christ the King, Hamilton, by Most Reverend Paul Reding.

While studying in Rome, specializing in sacred scripture and the Book of Revelation, he received his Licentiate in Sacred Scripture from the Pontifical Biblical Institute in 1978 and a Doctorate in Theology from the Gregorian University in 1986.

In 2007 Cardinal Collins became a ex-officio member of the Canadian Conference of Catholic Bishops Permanent Council, the Chancellor of the University of St. Michael's College and the Pontifical Institute of Mediaeval Studies, in Toronto. He is the Chair of the Board of Governors of St. Augustine's Seminary, and the Chair of the Board of Directors of Redemptoris Mater Missionary Seminary, Catholic Charities and Catholic Cemeteries and is a Trustee of ShareLife's Advisory Board. In 2008, Cardinal Collins was elected President of the Assembly of Catholic Bishops of Ontario.

During his time thus far in Toronto, Cardinal Collins has served the global church through his membership with the Pontifical Council for Social Communications, Congregation for Catholic Education and Commission of Cardinals for oversight of the Institute for the Works of Religion (IOR). He has participated in the Synod on the Eucharist, and the Synod on the Middle East, served as an Apostolic Visitor in Ireland and also as the Delegate of the Congregation of the Doctrine of the Faith for Anglicanorum Coetibus. 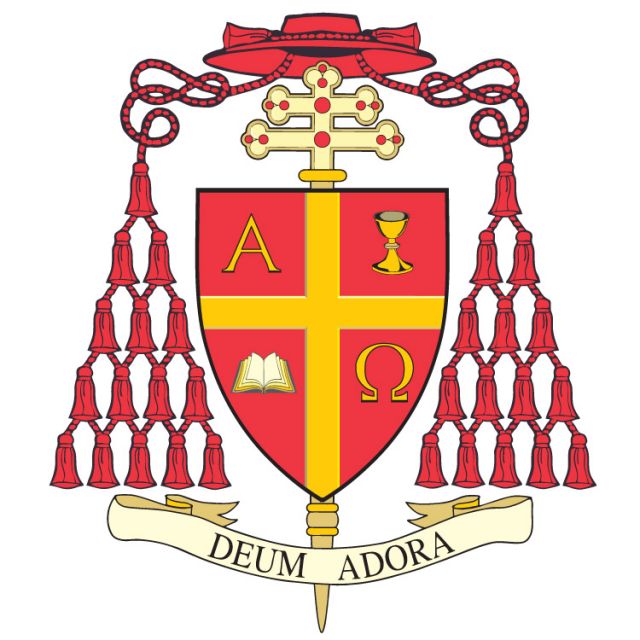 EXPLANATION OF THE COAT OF ARMS FOR THOMAS CARDINAL COLLINS
The motto "Deum Adora" (Worship God) is taken from Revelation 22:9. When St. John seeks to worship the angel who has shown him the great visions of the book, the angel rebukes him: "Worship God." It is God who claims our adoration and loyalty, in worship and in action. St. Thomas More expressed this when in his last words before martyrdom he said: "I die the king's good servant, but God's first." Our priorities in life must be clear and determined by our adoration of the Lord.

The shield with a gold cross on a red background is based on that of St. Peter's Seminary in London, Ont., where Cardinal Collins studied, lectured and was eventually Dean of Theology and Rector. The Alpha and Omega recall Revelation 22:13, where Jesus says, "I am the Alpha and the Omega, the first and the last, the beginning and the end." The open Bible and the chalice represent the two great ways in which we experience Jesus in the Church, in Word and Sacrament.

The symbol above the coat of arms of a red galero (wide-brimmed hat) with 15 tassels on each side, is a widely-recognized indication of a cardinal, commemorating the tradition (prior to Second Vatican Council) of the Pope's presentation of a red tasseled galero to new cardinals.