The Office for Promoting Christian Unity and Religious Relations with Judaism has a dual mandate in the Archdiocese of Toronto:

Vision
The desire and vision of Jesus Christ ‘that they may all be one’ (John 17:21), received in the teaching of the Catholic Church at Vatican II and post-conciliar magisterial documents, underlies and shapes the promotion of full visible unity among Christians, Churches and ecclesial communities in the Archdiocese of Toronto.

“The Catholic Church solemnly pledged itself to work for Christian unity at the Second Vatican Council. The Decree Unitatis Redintegratio explains how the unity that Christ wishes for his Church is brought about ‘through the faithful preaching of the Gospel by the Apostles and their successors—the Bishops with Peter's successor at their head—through their administering the sacraments, and through their governing in love’, and defines this unity as consisting of the ‘confession of one faith…the common celebration of divine worship…the fraternal harmony of the family of God’. This unity which of its very nature requires full visible communion of all Christians is the ultimate goal of the ecumenical movement. The Council affirms that this unity by no means requires the sacrifice of the rich diversity of spirituality, discipline, liturgical rites and elaborations of revealed truth that has grown up among Christians in the measure that this diversity remains faithful to the apostolic Tradition.” (Ecumenical Directory §20).

Mission
The Office fulfills the mandate of the promotion of Christian unity by providing opportunities and resources for the formation of Catholics in the Archdiocese of Toronto as well as events that foster encounters and cooperation with other Christians, Churches and ecclesial communities.

Among the activities that promote the restoration of full visible unity, priority is given to the Week of Prayer for Christian Unity and spiritual ecumenism, education and formation, dialogue as well as common witness for peace, justice and the integrity of creation.

Vision
The Catholic Church’s vision of relationship with the Jewish people is grounded in a biblical tradition that is received in Vatican II’s Declaration Nostra aetate and post-conciliar magisterial teaching.

The Church cannot forget its spiritual bond with Judaism for “she draws sustenance from the root of that well-cultivated olive tree onto which have been grafted the wild shoots, the Gentiles.”1

Catholicism recognizes that “God holds the Jews most dear for the sake of their Fathers; He does not repent of the gifts He makes or of the calls He issues-such is the witness of the Apostle (Rom. 11:28-29)” and “awaits that day, known to God alone, on which all peoples will address the Lord in a single voice and "serve him shoulder to shoulder" (Soph.3:9).2

The Vatican Commission for Religious Relations with Judaism has stated “that the Jews are participants in God’s salvation is theologically unquestionable, but how that can be possible without confessing Christ explicitly, is and remains an unfathomable divine mystery.”3

Marking the 55th anniversary of Nostra aetate on 28 October 2020, two statements were released by the heads of the Vatican's Commission for Religious Relations with the Jews and the International Jewish Committee for Interreligious Consultations (IJCIC).

Cardinal Kurt Koch of the Vatican referred to Nostra aetate as the “‘Magna Carta’ of Catholic-Jewish relations” and noted that “We are inseparably linked in the essential foundation of faith in the God of Israel, and we are united by a rich common spiritual heritage and the legacy of a longstanding shared past. Christianity has its roots in Judaism; the latter constitutes the nucleus of its identity.”

Rabbi Marans, speaking for IJCIC in the organization’s message to Cardinal Koch, stated that “Jews have welcomed the Church’s outstretched hand and created the religious, communal, and academic structures and responses necessary to partner with Catholics in an era that transformed two millennia of enmity into a blessing of amity. For half a century, Jewish communities across the globe have reached out to Catholics in friendship.” He also pointed to the friendships that reflect tangible progress in “the depth of relations between Catholic and Jewish leaders and those mirrored by their constituents" assuring “open and candid communication that are essential in addressing challenging issues”.

The heritage that grounds this vision makes the religious dialogue between Christians and Jews unique and calls for respect and gratitude with the hope of a new chapter of shared history.

Activities
The Office fulfills its mandate of the promotion of good relations, mutual understanding and respect with the Jewish faith community by encouraging opportunities and providing resources for the formation and education of Catholics in the Archdiocese of Toronto as well events that foster encounters and cooperation with Judaism.

"Since the spiritual patrimony common to Christians and Jews is thus so great, this sacred synod wants to foster and recommend that mutual understanding and respect which is the fruit, above all, of biblical and theological studies as well as of fraternal dialogues.”

“In her rejection of every persecution against any person, the Church, mindful of the patrimony she shares with the Jews and moved not by political reasons but by the Gospel's spiritual love, decries hatred, persecutions, displays of anti-Semitism, directed against Jews at any time and by anyone.”

The Archdiocese of Toronto encourages opportunities to contextualize the Declaration of Jewish-Catholic Dialogue for Canada (2015), especially coordinating and encouraging local initiatives that raise greater awareness of the improved and fruitful relationship between the Catholic Church and the Jewish people. 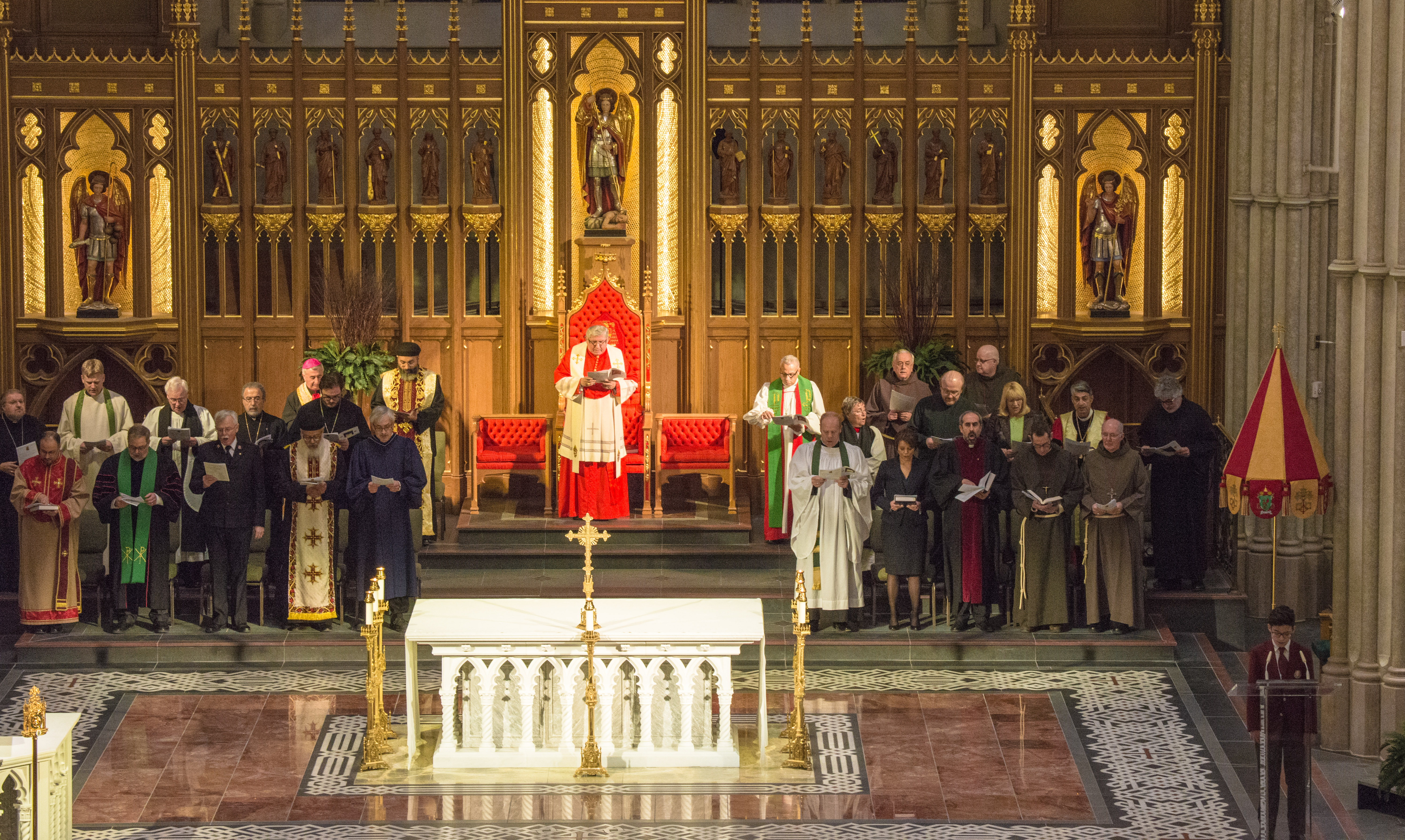 A Commission was mandated with the task of fostering Christian unity and promoting ecumenical and interfaith dialogue in the Archdiocese of Toronto as early as January of 1963. On 30 September 1987 Gerald Emmett Cardinal Carter established The Ecumenical and Interfaith Affairs Office in the Archdiocese of Toronto. Cardinal Carter said that it was the responsibility of the local church, following the teachings of the Second Vatican Council, “to implement worldwide ecumenical directives, but also to take the initiative, within the unity of faith, to enrich this movement by our own forms of ecumenical action in prayer, education, the media, social work and theological exchange.” Thomas Cardinal Collins responding to the evolving religious landscape in the Archdiocese and following the organizational model at the Vatican, established two departments on 27 August 2020, each with its own specific responsibilities: the Office for Promoting Christian Unity and Religious Relations with Judaism, and, the Office for Interreligious Dialogue.

The terms ‘ecumenical’ and ‘interfaith’ are often popularly used interchangeably. However, in Catholicism, they are distinct. “It is important not to lose sight of the essential difference between dialogue with different religious traditions which aims at establishing good relations and co-operation, and dialogue with other Christian communities which aims at restoring the unity Christ willed for his Church and is properly called ecumenical.”4

Ecumenism is “not premised on compromise as if unity should be achieved at the expense of truth. On the contrary, the search for Christian unity leads us into a fuller appreciation of Gods revealed truth. The bedrock of ecumenical formation, therefore is that ‘The Catholic faith must be explained more profoundly and precisely, in such a way and in such terms as our separated brothers can also really understand (UR §11).”5

The promotion of Christian unity involves a necessary appreciation of the faith of the Church received through the ages and demands the formation of an ecumenical spirit that is grounded in prayer and discernment and is disposed to a method for dialogue and engagement in love, truth and life.

Religious relations with Judaism are coordinated by the Office for Promoting Christian Unity.

The Office for Promoting Christian Unity and Religious Relations with Judaism has a Director who coordinates and promotes its dual mandate.6 When projects and questions are raised by the Archbishop of Toronto, a Commission is established to assist the Director in fulfilling the mandate of the Office.7

The Office represents the Archdiocese of Toronto at various ecumenical and Jewish events; locally, nationally and internationally.